Set amid the high Himalayas, “abode of the gods”, Nepal has been called the kingdom where deities mingle with mortals. As one of the remotest corners of Nepal, Dolpo was, until recently, virtually unknown to the outside world. Only a few learned lamas understood the fascinating and complex culture, which has evolved over hundreds of years, with little external influence, from the Tibetan religions of Bon and Buddhism.

The mysterious and beautiful “hidden land” of Dolpo is situated far to the north of Kathmandu, the capital of Nepal, bordering the Tibetan plateau. The people of Dolpo therefore have strong cultural links with Tibet. To the east, west and south are the Nepali mountain districts of Mustang, Jumla, Mugu, Myagdi, Rukum and Jajarkot. The name Dolpo comes from the Tibetan word “dol” meaning “overflowing”, which refers to its abundance of natural and mineral resources and manifestations of religious significance. It is the largest of Nepal’s 75 districts, but also the most sparsely populated, with the average population density a mere 3.7 per square kilometre, and some areas much less. The district lies in the trans-Himalayan region, and has an incredible altitudinal range, from just over 1,500 metres in the southernmost part, known as lower Dolpo, to 7,381 metres at the summit of the Churen Himal, the highest peak in upper Dolpo. The scenery, especially in Upper Dolpo, is extremely dramatic, with a maze of wide glacial valleys, precipitously steep slopes and high ridges, folded and faulted limestones and sandstones, moraine deposits, rock headwalls and peaks above 6,000 metres. The arid climate of these rugged areas is reflected in the sparse nature of the natural vegetation, and thus the majority of the population lives in the river valleys of Lower Dolpo, where the higher rainfall supports lush vegetation and forests.

A Brief History of Dolpo

The original Dolpo people were a pure Tibetan race, who came from three different areas of the upper Ngari region in western Tibet. Little is known about its early history, but Dolpo was originally administered as a part of Ngari. Later, it came under the jurisdiction of the King of Mustang, acting as regional administrator for the Lama ruler of Ngari. During other periods, both the great King of Jumla, the district to the west of Dolpo, and the Ranag King of the Nangkong valley in Upper Dolpo ruled the area. At one time, Upper and Lower Dolpo were separated, with Upper Dolpo remaining under the rule of the Ranag family and Lower Dolpo under the Jumla King. All that remains of the Ranag rule is a ruin in the Panzang valley in Upper Dolpo, believed to the remains of a three-storey stupa or palace. The Mustang and Ranag Kings shared a close and long-lasting relationship, and in ancient texts, it is written that the Mustang King presented his eldest daughter in marriage to the Ranag King. The Hindu King Bikram Shahi of Jumla ruled Lower Dolpo around four hundred years ago, as part of the Sinja Empire. Despite his Hindu beliefs, the King allowed five lamas to come from Tibet to promote Buddhism in Dolpo, following the earlier work of four Tibetan lamas in Upper Dolpo. Many of the gompas in existence today were founded by these lamas, who settled in Dolpo to fulfil their commitment to religious work. Over the centuries, other dedicated lamas and village leaders built many other fine chortens (stone monuments) and gompas, in which beautiful statues and learned texts record-ing the philosophies and mythologies of the area have ‘peen preserved and handed down. Before the area was unified with Nepal, the people of Dolpo were self-governing, with tie land divided into seven parts, each under a local leader. Now there are 45 named villages, although more half the population lives in scattered housing among the hills and mountains. Most of the larger villages are in Lower Dolpo and have grown out of ancient settlements where farming was possible.

Extracts from “Dolpo, The Hidden Land” by Dr. Namgyal Rinpoche 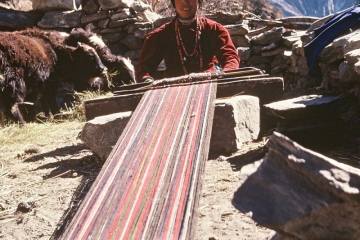 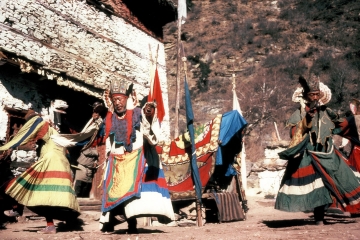 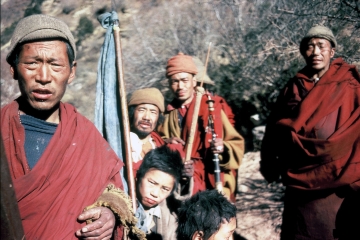 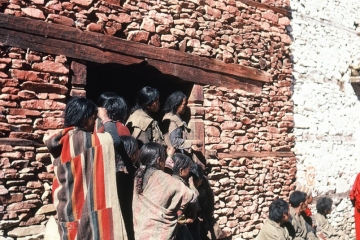 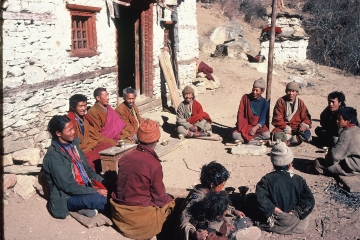 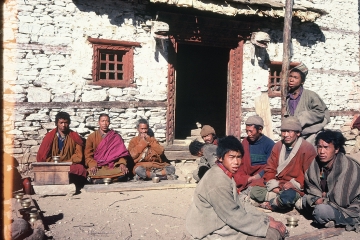 Bön is considered by Tibetans to be the indigenous religion of their country, predating the official arrival of Buddhism by hundreds or even – as some texts maintain – thousands of years. The historical origins of Bon remain uncertain. While there is much in it to suggest the late influence of monastic Buddhism, clues to the sources of many of its traditions lie concealed within its vast unread literature, the ruins of its temples and palaces that dot the Tibetan landscape, and its repertoire of rituals and myths. There are grounds for believing that on has been influenced in important ways by the Zoroastrian religion of ancient Persia, by Shaivite Tantrism from Kashmir, by early strains of Central Asian Budidlism, by Chinese Taoism arid, not least, by the nameless autochthonous religion of Tibet itself. The origin myth of the Bonpos claims that the religion was brought to earth by the divine Tortpa {“the Teacher”} Shenrab Miwo, who was born a prince in the mysterious land of OImo Lungring. Ron subsequently spread through the great confederation of Shang-zhun9, which extended from its heartland in Western Tibet, across the barren Changthang – the high Northern Pfateau that stretches south of the wastes of the Takla Makan desert – and eastwards into the fertile valleys of Kongpo and Kham, where it maintained its rule through a confederation of vassal states. Bön and Buddhist sources concur that the former first entered Tibet when priests from Zhang- zhung were invited to raise a tomb and perform burial rites for the eighth king of the Yarling Dynasty. As the power of this dynasty rose, and Buddhism was adopted as the state religion after the seventh century, Bön was persecuted and Zhang-zhung was annexed by the expanding Tibetan empire. Most Bönpos who did not accept forcible conversion migrated to the margins of the empire – mainly the Himalayas and the eastern marches – and there they continue to flourish down to the present day. The literature and practices of Bön, from the most basic teachings to the most esoteric Tantric practices, are often practically identical with those found in the Tibetan Buddhist traditions. Even key terms and concepts, such as sang-gye, meaning Buddha, are the same. According to the Bönpo Lamas themselves, the main difference between Bön and the Buddhist schools of Tibet is one of lineage rather than of practice or doctrine: both see enlightenment as the ultimate goal. on has a number of strong parallels with the Nyingma tradition: the majority of their teachings were discovered as “hidden treasures” (terma) from the eleventh century onwards, and the highest teachings of both traditions are known as Dzogchen, the ‘Great Completion”. Bön monasteries can seem indistinguishable from those of other Tibetan traditions, but they do have certain characteristic features such as the use of the colour blue within the monastic costume, and even the lay practitioners are distinguishable by their tradition of circumambulating stupas and religious sites in an anticlockwise direction, in contrast to the clockwise direction of the Buddhists, Visible differences are also to be found in many of the symbols featured in the two religions. For example, the auspicious Swastika of the Buddhists has a clockwise orientation, while that of the Bönpos, the Yungdrung, turns anticlockwise. The symbol itself has particular significance in Bön as the emblem of immutability. Thus the teachings of Shenrab Miwo are often referred to as ‘Yungdrung Bon” – Eternal Bon, Likewise, while the piles of inscribed “mani stones” that dot the Himalayan landscape feature the mantra Om mani padme hum, the corresponding formula in Bönpo communities is Om rnatri muye sale du. Less obvious, but more fundamental differences are to be found in literature and art: Bön has many distinctive classes and names of divinities, as well as unique rituals, and a cosmogonic myth quite unlike the Buddhist version of the Universe’s origins.